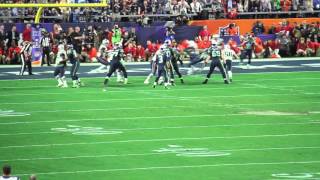 Our View of the Biggest Interception in Super Bowl History!

In case you missed it - basically, if you were under a rock - the New England Patriots defeated the Seattle Seahawks in one of the most exciting games - let alone Super Bowls - that have ever been played. With the Seahawks on the goalline carrying all the momentum in the world, Coach Pete Carroll opted to throw - a pass picked off by relatively unknown (at the time) Malcolm Butler - instead of handing off the ball to one of the most powerful running backs in the game, Marshaw
30 views0 comments

Seahawks Beat Packers in OT, Head to the Super Bowl!!

The crazy fan reaction after the Seattle Seahawks beat the Green Bay Packers in NFC title game as seen from the "Hawks Nest"! Russell Wilson hits Jermaine Kearse for the game-winning walk-off touchdown to send the Seahawks to the Super Bowl in Overtime over the Packers! #seahawks #packers #nfcchampionship #seattle #greenbay #overtime #touchdown #russellwilson
23 views0 comments

Hawaii Sports Fans NFC Championship tour group looks on and goes wild with The 12th Man as Russell Wilson draws the 49ers D offside before throwing a perfect 35-yard strike to Jermain Kearse in the 4th quarter of this amazing game to put Seattle up for the first time in the game. #seahawks #49ers #nfcchampionship #russellwilson #hawksnest #seattle
6 views0 comments